Newly married Jane Vincent is enjoying the life of an itinerant artist painting murals for wealthy patrons, who now include the Prince Regent himself. What Jane doesn't like is how her husband gets all the credit because he's a man and she's assumed to be incapable of thinking of anything of importance. Then the Vincents head off to Belgium for a honeymoon and to see M. Chastain, a famed glamourist who has invented a new way to weave the folds of glamour. In Belgium, Jane's opinions are more valued and she enjoys, though is not entirely comfortable with, the easy manners of the Belgians. While in Belgium, Jane is inspired to create a process for recording glamour in glass. Vincent is excited and proud of Jane's skill but it may not be feasible given the properties of glassmaking. Still, it doesn't hurt to try and try Jane does until she's exhausted. While Jane is recuperating, her husband takes a commission in Brussels. It sounds boring but Jane longs to be by her husband's side. When he abruptly pushes her away, she begins to suspect him of having secrets and fears he no longer loves her. Then Napoleon escapes from Elba and Jane soon discovers just how important she really is. This sequel to Shades of Milk and Honey is less Jane Austen and more Georgette Heyer but more realistic. Aside from the magic, Jane and Vincent's marriage seems to be portrayed very realistically. I loved that Jane and Vincent worked together as true partners. Jane is still extremely insecure which causes a bit of a misunderstanding (thankfully they have avoided the traditional BIG misunderstanding). Then they actually talk about their problems and her insecurities and he reveals his true feelings. The plot about glamour in glass gripped me from the very beginning and I couldn't wait to see how Jane's experiments turned out. Then the plot turned to a different direction and then in another directions. I wanted more about glamour and the experimentation with it and less domestic problems and less adventure. What I loved about the first book is that the didn't have to save the world with magic. Some parts of the plot were cliched and predictable. I guessed Vincet's secret right away and I think as clever as Jane is, she should have figured it out. She also should have figured out sooner what I realized about a certain person whom she trusted. I also sort of expected what happened to Jane at the end but felt that it was a bit too much and I really didn't care for that plot at all. I really liked how the properties and techniques of glamour were explained.Another thing I enjoyed about this novel is that the author wrote with a Jane Austen dictionary without sounding archaic, plodding or silly. It reads very easily and a fast reader could easily finish the book in a day or two. I'm still intrigued by glamour and hoping for more of it in the next book. (Which I hope will be soon!) The cover, as beautiful as it is, is all wrong. The woman on the cover is too pretty to be Jane and the bubbles look more like soap than glass. 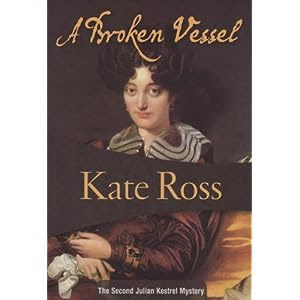 One evening in Haymarket, Sally plying her trade, picks up three men whom she nicknames Bristles, Blue Eyes and Blinkers. Bristles is timid and hasn't been with a woman in a long time, Blue Eyes is rich, as good looking as sin and is considerate of his health. Sally takes a liking to them both. Blinkers (so named on account of his spectacles) is a tough customer who roughs Sally up and leaves her for dead but not before she got in a good whack of her own and pockets his handerchief as she did with the others. Sally picks herself up and heads back to work where the next customer she solicits turns out to be her own brother. Sally's brother is none other than Dipper, valet and friend to Julian Kestrel, the notable dandy. Dipper takes Sally home to get her patched up and when Julian arrives, he is kind and caring. Sally tries her hardest to win him over but he resists - for now anyway! Julian believes Sally should return the handkerchiefs until a mysterious note hidden inside one of them falls out. The note is from a girl who is in trouble and not all of it her own making. Julian feels they have to investigate and find the woman and help her. They must be discreet so Sally doesn't get into trouble and because Julian is acquainted with "Blue Eyes", the son of a notable peer, Julian takes an especial interest in the case. Their search leads them to a Reformatory for prostitutes, a murder and a monumental scandal that shakes Society. The mystery also reveals the true natures of each of Sally's conquests. Sally falls completely in love with Julian but can she convince him of his feelings for her? Will she survive the investigation and live long enough to make one more conquest? I liked this book much more than the first one in the series. Though it's more gritty and realistic than the stories I prefer, the historical details seemed well-researched. The mystery grabbed me from the beginning and I could not put the book down until it was solved. There were so many twists and turns that it was impossible to guess what really happened. I was completely wrong about the murderer which I'm grateful for because then the plot would have been cliched. I liked the relationship between Sally and Julian. It helped the reader learn a bit more about Julian though he's still very one-dimensional. I'd like to know more about him, who he is and why he poses as a dandy but possesses a keen mind. What does he think and feel? I was saddened to learn of the untimely death of the author. Perhaps I will never learn more about Julian Kestrel but maybe the last two books in the series reveal more depth.
Posted by QNPoohBear at 5:24 PM