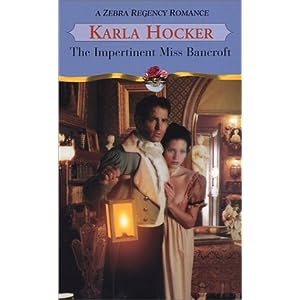 The Impertinent Miss Bancroft by Karla Hocker -- Regency Romance
Miss Sophia Bancroft has been let go from yet another job as a governess for impertinence. She vows that this time she will hold her tongue and keep the position that allows her independence and the ability to care for her sisters. Upon her arrival at the home of Lord Northrup Sophy discovers that a valuable necklace has been stolen. Sophy springs into action and wishes to solve the mystery, especially once she meets his Lordship's kind Aunt Addie who has been accused of the theft. Lord Northrup is caught up in Sophy's enthusiasm and determined nature and reluctantly agrees to allow her to ask questions. Sophy thinks Lord Northrup will be the usual toplofty Lord she's used to but is surprised by his kindness and generosity. As more things turn up missing and the the mystery turns dangerous, Sophy is determined to solve the mystery and save her new friends, if only Lord Northrup would listen to her! Lord Northrup refuses to allow any one else to investigate, especially not Sophy. It's not until she defies his request that Sophy discovers why Lucian did not want her to rush into danger. This is a cute, light fluffy romance with the mystery as the core of the story. The romance takes more of a back seat to the mystery but develops better than a traditional Regency (mystery). I really liked Sophy's spirit. She's funny, strong and brave though she acts immature at times. Lucian is a different type of hero. He's a radical and revolutionary, a Whig with political ambitions instead of the usual rake or Corinthian hero. He's caring and charming as well but not well developed since not much of the story is from his point of view and when it is, he's trying to solve the mystery. The villain is really obvious. I was hoping that it wasn't so obvious so I kept reading until I finished. There are some great secondary characters in this book, especially Miss Addie, the kind and loving aunt and Skeet, the street urchin rescued by Miss Addie. There are so many characters in this story that the story really only touches the surface of who they are. I'd like to see a series of books featuring Sophy before this novel solving crimes and other books featuring some of the other characters. If you're looking for a bit of fun summer reading, I would recommend this book. 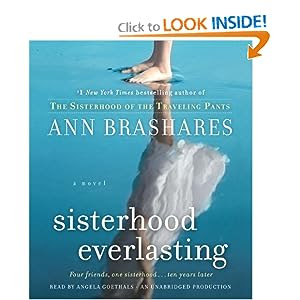 Sisterhood Everlasting (Sisterhood of the Traveling Pants) by Ann Brashares, read by Angela Goethals -- Young Adult/Adult Contemporary
Ten years after we last met them, the Septembers have grown up and grown apart. At 29 Lena teaches at the Rhode Island School of Design in Providence, Carmen is an actress in New York, Bee is in San Francisco with Eric and Tibby ... Tibby moved away to Australia with Brian several years ago and seems to have drifted away. When Tibby sends her friends plane tickets to Greece, the Septembers are ecstatic. They all look forward to reconnecting. They've been lost without each other and need this trip. Then the unthinkable happens and the sisterhood is broken. As they deal with devastating grief, the Septembers have to learn to navigate adulthood alone. Lena struggles with her feelings for Kostos, Carmen is trapped in an engagement to a man she doesn't love, Bee drifts around and Tibby's secrets threaten to overwhelm them all. I had a really hard time getting through this book. The secrets and devastating grief that nearly tear the sisterhood apart make this a difficult book to get through. After the initial tragedy, I wanted to put the book down but I picked it up again much later because I wanted to know what happened.There are so many plot shockers in this novel that really undermine the credibility of the story. I identified a lot with Lena as I did in the earlier books. I almost laughed because I've had some of the same conversations with my own family. Bee was my second favorite character. I think she was the only one who actually changed and learned something before the epilogue. The characters remain the same as they ever were, meaning they don't grow up. The lesson at the end is rather heavy handed and finally the characters can grow. By that time they spent so much time being whiny and annoying, I stopped caring about them.The reader of the audio book is very good.  Her voice is pleasant and not too hard to listen to. She pitches her voice differently for each character and I could usually tell who was who. If you enjoyed the rest of the series and enjoy melodramatic stories will like this one.
Posted by QNPoohBear at 9:02 PM