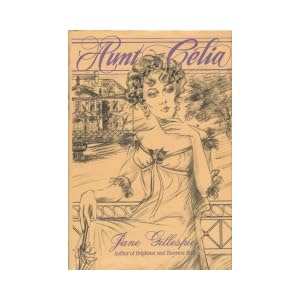 Aunt Celia by Jane Gillespie -- Austenesque Regency Romance
Eighteen years after the conclusion of Emma finds Mr. Weston a widower once again. Mr. Weston and his only daughter Celia feel the loss of this most beloved mother and wife keenly. Feeling that Celia is in need of female companionship, Mr. Weston brings in a Mrs. Petteril to keep Celia company. Celia doesn't much like Mrs. Petteril and they do not spend much time in each other's company. Mrs. Petteril tries to be as subservient as possible to the Westons but has plans of her own. Her plans include securing the future for herself and her scheming son Henry, who is forced to retire to Surrey after some misadventures. When Frank Churchill decides to bring his family to Highbury, it's cause for much joy at Randalls. The Churchill clan includes eldest daughter Stella, 16; several younger children; Miss Bates and the boys' tutor, Mr. James Aske. Celia and Stella are delighted to see each other again and Frank hopes that Celia will exert a more sober influence over the silly, spoiled Stella. Celia spends much time at Donwell Abbey, where the Churchills are staying. Henry Petteril also spends a lot of time at Donwell and is delightful company. The young people find Mr. Aske a bit quiet and mysterious. When his secret comes out, only Celia is sympathetic. More secrets about the mysterious tutor are revealed, Stella inadvertently makes mischief and true love is revealed in this sequel to Emma. The plot of this story is very slow moving. It didn't capture my attention at all and I had to force myself to finish it. There are some surprises and twists that I didn't expect before it settles down into predictability. The characters do not really come to life and they are not very memorable. Frank Churchill has become a severe, authoritarian father and employer which seems a bit out of character. Jane Fairfax is a smiling, loving, somewhat mysterious mother and does not play a large role in the story. Only Miss Bates remains her same garrulous self and the author does a wonderful job recreating her speech patterns and the subjects she fixates on. She is quite my favorite character in the whole novel. I didn't quite like the romantic pairings. I found Celia's romance boring and Stella's too sudden. This book isn't exactly a must read for Janeites but if you loved Emma and want to know more about the minor characters, then I would suggest reading this book. If you're looking for passion or adventure, look elsewhere. 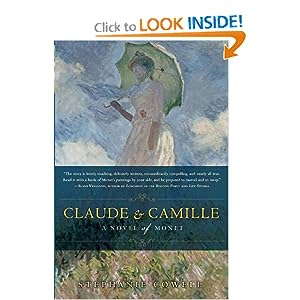 This is a fictionalized biography of one of the world's greatest painters and his great love, Camille. Young Oscar, as Claude's family called him, was a hothead who wanted nothing to do with his father's nautical supply business. He wanted to make art. At first his dream was to be the most successful caricaturist in France until a challenge from a local man has Monet taking up a brush and paints to capture color and light. It's difficult for Monet to capture what he sees as the light is always changing, but he enjoys the challenge and defies his family to move to Paris in order to pursue his art. In art school he meets a bunch of other young rebels: Frederic Bastille, Camille Pissaro, Jean Renoir, and others who feel about painting as he does. Frederic is torn between duty and desire but if he complies, his family money will keep them all painting until they achieve success. Monet has an eye for beauty, especially pretty girls. A chance encounter at a train station of a lovely young girl longing to be free leads later to a love affair that defied the odds. The love young Camille Doncieux is a good girl from a good home. She's been to convent school and is supposed to marry a middle-aged man she doesn't love and follow in her older sister's footsteps. When Camille meets Monet in her uncle's bookshop, she is intrigued and agrees to model for the young painter. By their next meeting, they've fallen passionately in love and Camille is prepared to risk everything to be with Monet. Living with a poor, temperate artist isn't easy and sometimes Camille longs for the finer things in life. As Monet and the others struggle, Camille believes in them and encourages her beloved Claude. Camille, too, has dark hours and the couple are left wondering if they made the right choices. Claude, obsessed with painting, doesn't always seem to see his pretty wife or understand her needs until their darkest hours.

As a huge fan of the Impressionists, I was eager to read this book. I adored Susan Vreeland's Luncheon of the Boating Party and an endorsement from her on the cover made me want to read this book too. The story fell a little short of expectations. It's defined as a love story for the ages but it ends up being about two very selfish people who never really get to know each other. We're told early on that Camille had dark secrets and her sister accuses Monet of killing Camille by making her a part of his bohemian life. I kept turning the pages until the secrets were revealed and I felt a bit let down. Some of the secrets are not very shocking and it's fairly obvious to the modern reader what Camille's biggest secret is but it's not something that would have been understood at that time so I suppose it would have been shocking at the time to realize  SPOILER in white text : one's wife was mentally ill. The big shock for me was that SPOILER ALERT (in white text follows) Frederic and Camille slept together and that Monet slept with Alice. Actually I sort of suspected something like that would happen with him given the Bohemian lifestyle but it marred the love story for me. Camille's death was also a bit of a let down given all the previous hints. What also marred the story was Monet's constant moodiness and stubbornness. I admire him for sticking to his passion because if not, the world would have have seen some of the most famous and well-loved paintings of all time. However, I felt Monet's stubbornness was at times really frustrating, especially from the point-of-view of a woman. I am not a wife or a mother but I can empathize with Camille and felt angry at Monet at times for not compromising!

At least Renoir was painting portraits of children for money. The tone of the voice of this novel is very modern and the writing is somewhat simplistic and mostly uninspiring except for a few passages here and there. I would have preferred a more nineteenth century voice. I also disliked the semi-graphic love scenes. You may skip them if you wish. Only the first time with Camille was necessary to describe their feelings and one other time later in the novel. What I did love about this novel is getting to know Monet and learning some of the creative process that went into his most famous paintings and the interactions between the artists. I would have preferred more of that. This book is OK but not great. I would recommend Luncheon of the Boating Party by Susan Vreeland instead. She is better able to get inside the heads of the characters and make the come alive to capture an important moment in time.
Posted by QNPoohBear at 10:55 PM