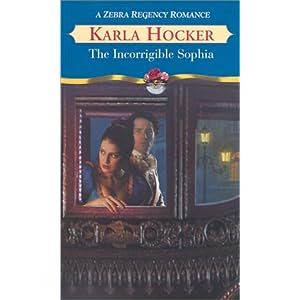 The Incorrigible Sophia by Karla Hocker -- Regency Romance
Sophy Bancroft and Lord Northrup are back for another adventure. Sophy's guardian has not given permission for her to marry her beloved Lucian causing the happy couple to have to wait until Sophy comes of age in two months. The date of the wedding is up for debate. Sophy wishes to marry on an odd-numbered day and Lucian on an even day. They both agree that they will be married as soon as possible after Sophy's birthday. They can't wait! Yet Lucian is ever called away on business for the Foreign Office and when a messenger for the Admirality turns up dead, the Payne brothers are busier than ever. The messenger, Lieutenant Peter Marston is accused of being a spy for the French. Sophy refuses to believe the kind young man would have done such a thing and she is determined to find the true traitor. When someone close to her is accused of murder, Sophy is more insistent than ever on finding the traitor. Lucian does not want Sophy to investigate. He would prefer to wrap her up and keep her safe. Sophy feels a bit stifled by his concern and wonders whether marriage is a good idea after all. Meanwhile, her new friend Lady Jane Hawthorne, a demure young lady who was once a gap-toothed, pig-tailed hoyden, is a match for Sophy's stubbornness. She's a loyal friend to the Paynes when they need one. Sophy isn't so sure about her other new friend, the French woman Lady Veronique. Can she get Veronique to tell her the truth and solve the mystery before it's too late? The mystery is this book is more serious than in the first book yet the reader is witness to the murder and therefore can figure out "whodunnit" right away. Thus the rest of the book drags on until near the end when more clues are revealed that lead Sophy to the true villain. For those wishing for more romance, there's more of Sophy and Lucian's relationship. They're alone briefly, occasionally, and kiss when they can. There's nothing approaching the level of romance in Regency Historicals though. I identified with Sophy's fierce independent nature and her extreme stubbornness and her cleverness. I am not as brave as Sophy and I do not think I'd go around chasing murderers. I thought she was a bit crazy at times. Lucian behaves more like a typical man of his time in this book and the relationship threatens to derail if they can't come to a compromise. I didn't like that part of the book because it wasn't happily ever after, but I appreciated the realism. I liked seeing some of the secondary characters from the previous book return and getting to know Lady Jane but there wasn't enough Miss Addie or Skeet to provide comic relief. Some of the characters seem to act differently than how they were described in the first book and other characters disappear all together. This story is not as well-written and the mystery not as tight as in the first book but it is still a good read. If you wanted more of Sophy, you will enjoy this book. 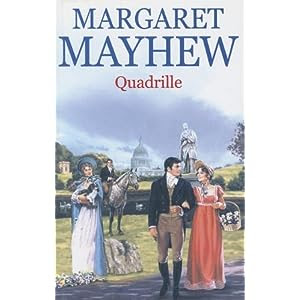 Quadrille by Margaret Mayhew -- Regency Romance
Lord Nicholas Strickland is a notorious rake and confirmed bachelor. He has no reason to marry for his Aunt Augusta will leave her estate to him after her death along with her fortune. Augusta Fairfax is tired of her nephew's behavior and demands that he marry someone suitable or lose the estate. Nicholas doesn't want to lose the only happy home he's ever known but neither does he want to marry. Aunt Augusta has in mind a bride for her nephew, Charlotte Craven, the daughter of an old friend.  Aunt Augusta believes Charlotte will be the making of Nicholas, but Nicholas thinks Charlotte will be a young, biddable bride, content to leave him to his usual behavior. He's confident his usual charms will quickly win the lady over. Nicholas sets out to woo Charlotte with shocking results. Not only is the lady not charmed by him, she positively seems to detest him. This has never happened to Lord Nicholas before but the game intrigues him and he sets out to make Charlotte love him. Charlotte knows Lord Nicholas could never love her. She's too tall, too outspoken and too content with country life to make a good wife. She's wary but perhaps there's some redeeming qualities to him after all. Meanwhile she has her hands full with her friend Amelia's romantic entanglements which include avoiding so-called proper suitors and secretly meeting Captain Young, Lord Nicholas' penniless friend. This novel has all the hallmarks of being a Pride and Prejudice type story yet it's not. Without giving too much away, I shall say that I found the story rather bittersweet. It's unconventional where I wanted convention. I really liked and identified with Charlotte. I think I should be like her were I a Regency lady. Amelia is a bit young and silly to be appealing as a heroine, but she's a nice sidekick and good foil for Charlotte. Lord Nicholas is a typical rake. His past is explored a little bit which I think could have been expanded on and really added to his character. As with the ladies, his best friend is a foil too. Aunt Augusta is a bit cruel and I could not like her very much. There are some amusing secondary characters, especially Marmeduke, Charlotte's large mutt. Mostly though the characters are typical stock characters that usually populate the light romances by Clare Darcy, Daisy Vivian, Marian Chesney and others. I would recommend this book to those who like those authors and those who might be looking for a slightly different take on the usual rake meets spirited heroine story.
Posted by QNPoohBear at 7:49 PM