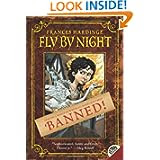 Fly By Night by Frances Hardinge -- Middle Grades Historical Fantasy
Imagine a fractured world where royalists are fractured into different segments battling with Parliamentarians and trade guilds for control of the kingdom. Imagine a world where most people are forbidden to read and only the official Stationer's Guild can print words and burn any books they consider objectionable. This is the world Mosca Mye is born into  at dusk on the sacred day of Goodman Palpitattle, He Who Keeps Flies out of Jams and Butter Churns.Mosca's father Quilliam, an eccentric scholar, names her after a fly and begins to tell baby Mosca about the political wars of the realm and of religious fanatics called Birdcatchers who once outlawed not just reading but worship of a pantheon of deities known as The Beloved. Quilliam also teaches his young daughter how to read before passing from this earth. Now twelve-year-old Mosca is orphaned and living with her cruel aunt and uncle. She longs for something more than slaving away at her uncle's book keeping. She's fascinated by words and longs for more, so when a wordsmith by the name of Eponymous Clent comes to the village of Clough Mosca is fascinated. When a stranger comes to town informing the magistrate that Clent is a swindler, Mosca is determined to save Clent. With her fractious pet goose in tow, Mosca frees Clent and talks him into letting her join him on his journey. Little does Mosca know that she will soon be caught up in an adventure that will introduce her to thieves, highwaymen, great ladies, cranky riverboat captains, smugglers, marriage houses (where anyone can be married for the right price) and Stationers. The journey takes them to the big city of Mandelion where Mosca hopes to attend school and further her education or perhaps work for the Duke of Mandelion's sister Lady Tamarind. Mosca discovers that her knowledge of words brings her power but it also makes her a pawn in the political war over who will control the crazy Duke: the Stationers or the Locksmiths. Mosca doesn't know what to think or who to trust. She must beware and learn to tell the truth for her self and decide where she belongs. The world of this novel is complex and requires the reader to pay careful attention to what is happening in order to sort out the different political and religious factions. I had a tough time understanding them myself. The world is not as well-drawn as Harry Potter, Phillip Pullman's Dark Materials or Cornelia Funke's Inkheart series but it's interesting just the same. It's loosely based on early 18th century England with lots of made-up elements. The strength of this novel lies in the plucky heroine, Mosca. Mosca is feisty and longs for freedom from her horrible life. She's similar to other feisty heroines in Middle Grades novels but she has the extra element of loving words. I can completely relate to Mosca's love of words and her desire to know more. Her dream of being recognized for her skill is a theme that runs through the novel. Her dream is understandable given the world she lives in. All of these things make her a great heroine and very sympathetic. My favorite character is Saracen, Mosca's bodyguard goose. I wish he had a bit more page time but some of the plot hinges on his actions. The story kept me guessing and second guessing though I thought I knew who I would trust, I could have easily placed my trust in the wrong people. It's wryly funny and very clever. The story reminded me a bit of Huck Finn. There's a good message about getting information to people so they can learn to think and decide for themselves what it is they believe in, if anything. There's room for all different beliefs. I would definitely recommend this to anyone at a 6th grade reading level or above. Though the main character is a girl, I think boys will like it too. I hope there will be more Mosca adventures to come. 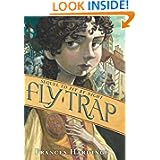 Fly Trap by Frances Hardinge -- Middle Grades Historical Fantasy
Mosca Mye is back in this sequel to Fly By Night. She (along with Saracen) and Clent are on the run. They're not wanted in Mandelion anymore and neither is Clent's poetry. They've had to beg, borrow and steal what little they can to survive making many enemies along the way. Mandelion is still in a state of rebellion and trade with other locations is prohibited, so money is not easy for the fugitives to come by. It seems that there's only one place open to them is far to the east, across a bridge that has a hefty toll. In order to raise money for the toll and free Clent from prison, Mosca accepts an offer to be a scribe at a Pawnbroker's Auction. She soon discovers a plot to kidnap a young lady and learns that her skill may be the death of her. Fortunately for Mosca, her temper helps her escape with her life and her quick wits help her fund an unwitting ally. Mosca and Clent finally make it to the town of Toll where people are judged based on the time of day they were born. Mosca, born in the evening, has a "night" name associated with traits such as lying. Clent, however, has a day name, at least for now. Some of the town's residents have been reclassified as night since the rebellion in Mandelion. Those with night names do not exist during they day. They're locked into secret rooms and can only emerge into another secret world at night. The day people depend on their Luck (a mysterious object locked inside a clock tour) to keep them safe. Issued visitors' badges depicting their Saint's symbol, Mosca and Clent try to warn the mayor of the plot to kidnap his adopted daughter Beamabeth. Mosca is jealous of the wealthy, beautiful, adored older girl whose name day is just a half hour before Mosca's making Beamabeth a golden girl and Mosca a fly. Mosca's determination to do the right thing and Clent's desire for a generous reward lead the co-conspirators into a heap of trouble and they may not escape alive. This sequel is not as charming as Fly By Night. What I loved about Fly By Night was the importance of words and free thought. In this book words just cause a lot of trouble. There's lots and lots of adventure in this book but I found it all to be a little too much. Mosca is forced to lie, cheat and steal to survive and I don't think that makes her very admirable. There's so much going on in this story that by the time it's all unraveled, it doesn't make a whole lot of sense. I was on the right track to guessing secrets long before Mosca and it seems as if she should have figured things out earlier. The ending drags on way too long. After the plot seems to have been wrapped up, there's more action before finally a resolution is achieved. Mosca delivers the moral of the story again revolving around doing the right thing and fighting for justice. I still like Mosca in spite of everything and I hope there are more Mosca adventures in the future.

Posted by QNPoohBear at 1:21 PM