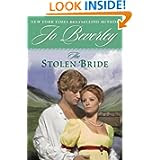 The Stolen Bride by Jo Beverley -- Regency Romance
Lady Sophie Kyle is two weeks away from marrying her beloved Lord Randal Ashby and she can't wait to be alone with him! However, Randal has pulled away from Sophie and she fears that he may not love her. Though they've known each other and been friends since childhood, Randal was forced to offer for her after saving her life and unwittingly compromising her. Sophie's feelings threaten to engulf her and she doesn't know what to do about it. Her new sister-in-law Jane is at her wit's end trying to keep Sophie from committing an impropriety so she calls on her old governess Mrs. Beth Hawley to come to Lord Wrayborne's castle to help chaperone the young bride-to-be.  Along the way Beth meets an acquaintance, Sir Marius Fletcher, who is on his way to the wedding. He needs a ride and Beth offers, after all, she's a widow and a governess, and he's a friend of the groom so there can't be anything improper in that.  Then the travelers come across a frail, injured woman in an overturned carriage. She also seems to be on her way to the wedding but she can not remember who she is. The old woman takes an interest in Sophie and tries to give the girl cautious advice. Sophie is surprised and a bit irritated at this woman's intense interest in her. Sophie has better things to do with her time than entertain a stranger. Her motive is to get Randal alone and find out how he really feels. Meanwhile, her chaperone Beth is stuck with the attentions of the two most rakish guests: Piers Verderan known as The Dark Angel and Sir Marius. Beth is a bit afraid of Ver but he seems to enjoy sparring with her. Sir Marius is kind and attentive and his pretty speeches make Beth blush. She begins to feel an attraction to the man but she's unsure whether she wants to throw her morals to the wind and give in to what she thinks he wants. A tragedy shows Sophie how she can truly support Randal and a villain threatens to undo all Sophie's happiness. This book is part of a series and references events that seem to have happened in Lord Wraybourne's Betrothed, which I have not read. I was intrigued by references to Randal and Sophie in A Regency Valentine and wanted to know more about them. I was disappointed that there was little character development in this story. Randal and Sophie are already in love and engaged and their misunderstanding is trifling and tedious. Likewise Beth and Sir Marius are underdeveloped. Their romance takes a back seat to Sophie's lust problem and is as a result unbelievable and very rushed. The plot references previous events and adds more melodrama on top of the heroine's previously harrowing adventures. How much abuse can one character take? This novel seemed to be basically for the fans of previous novels who wanted to know what happened to the characters and a set up for Emily and the Dark Angel. Perhaps if I had read the series in order I would have liked it better. Jo Beverley's novels are not what is commonly called a "sweet" Regency in the tradition of Georgette Heyer. They don't contain any explicit content but they do deal with feelings of attraction. 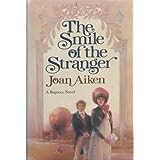 The Smile of a Stranger by Joan Aiken -- Regency Romantic Fiction

Miss Juliana Paget has lived in Florence most of her life with her beloved father who is a writer of well-known histories. She acts as scribe to her ailing father and has developed a crush on King Charles I. After relating to her father an amusing tale of an outraged foreign woman shopping on the Ponte Vecchio, her father suddenly grows very pale and agitated and insists they leave the country for England at once! That is easier said than done for they must pass through France where a bloody revolution is taking place. Along the way, a nice man helps Mr. Paget ease his travel sickness and in turn Juliana saves the stranger from being hanged by a French mob. The stranger, Herr Welcker, an envoy of the Prince of Wales, is in France to collect treasures for the prince. Juliana and her father then embark on a dangerous, dashing journey across the English channel accompanied by Herr Welcker. Upon arriving in England, Juliana discovers family she never knew she had. Her father had been estranged from his family for many years since his marriage to an unsuitable woman and his refusal to join the army like his forefathers. Juliana spends some time in London acting Cinderella to her spoiled ugly cousins while her aunt tries hard to marry Juliana off to the revolting old Sir Groby. Juliana is rescued by the handsome Captain Cox who bears a strong resemblance to King Charles I. Juliana soon discovers that the sheltered life she had led and her father's secrets may put her in grave danger especially from her own mother! She is not without allies though but her innocence may overcome their protection. This story started off exciting full of mystery and a daring escape but quickly turned melodramatic. There is a lot going on in this story and it's too much for one novel. Juliana is too naive for me to like her much. She has been sheltered all her life but her guardians should have done a better job protecting her and helping her understand the danger she was in. I figured out the villain and their motive right away! The romance is very unconventional and mostly a non-romance until the very end. The relationship between the characters should have been built up more. I didn't really like the hero and wished that some of the story was from his point of view so the reader could get to know him better. Some of the secondary characters were very appealing and I enjoyed reading about them more than Juliana. The eighteenth century setting seems well-researched except for some factual errors, one of which may have been deliberate by the character and one may have been a typo. The setting is the best part of the whole book. I can fully visualize 1794 England. I would recommend this book to fans of the traditional Regency plot.
Posted by QNPoohBear at 9:36 PM