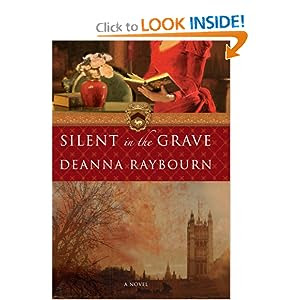 Silent in the Grave (Lady Julia Grey Mysteries 1) by Deanna Raybourn -- Victorian Mystery/Romance
Lady Julia Grey first meets Nicholas Brisbane over her husband's dead body - or more accurately, her husband's still twitching body. Sir Edward Grey has finally succumbed to the heart condition which has plagued his family for generations. Julia feels very lost and without purpose. True, her marriage to her childhood friend had not been all that was ideal, but her life had a routine and a purpose while Edward was living. Julia, now a wealthy widow, wonders what she should do now. Surrounded by a loving, eccentric family, she has always craved normalcy but now she thinks perhaps she's more like the rest of the March family than she thought. When Brisbane shows up claiming that her husband was murdered, Julia refuses to accept his allegation and dismisses him. Julia can't put the darkly brooding stranger out of her mind though and when she discovers incriminating evidence she feels she can turn to Brisbane to help her solve the mystery of her husband's murder. Brisbane feels the trail has run cold after a year but Julia remains convinced and Brisbane reluctantly agrees to help her. Julia's youngest brother and her servants are also keeping secrets which may or may not have anything to do with the investigation. Brisbane too has secrets of his own to keep. Brisbane tries to keep one step ahead of Julia and keep her safe while keeping the relationship strictly professional, which confuses and maddens Julia if she stops to think about it. Julia discovers that her husband was entangled in a web of lies that could cost her her life. This murder mystery has many elements that will please any fan of 19th century novels: a dark brooding hero to make the Brontes and Byron proud, a spirited heroine, loyal servants and journeys to various parts of late Victorian London. Brisbane is maddeningly attractive in a Byronic sort of way. He's much more appealing that Mr. Rochester and not as temperamental as Heathcliff though he does bear a strong resemblance to the latter. Julia is an interesting heroine. The first half of the book is mainly about her journey of self-discovery. She's tried hard to be conventional but must determine whether that's what she really wants or not. She's desperate to be noticed but shy of attracting attention. She's a loyal sister, daughter, friend and a heroine to admire. She also has great taste in books. There are references to Jane Austen, the Brontes, Byron and other 19th century writers.  I adored the mad March family though I'm not sure that all of their activities would have been understood or discussed in 1886 but I suppose it works because they're so unconventional. Portia and The Ghoul add many lighthearted moments to the novel. The mystery is introduced about a third of the way through and by that time, I couldn't put the book down. It kept me guessing all the way until the very end. I was able to figure out Edward's big secret that led to all the other secrets and I figured out the secret of Brisbane's heritage almost right away. I did not guess the identity of the villain until just before Julia. There is one secret that is too Gothic and seems out of place in the novel which I did not like. The ending is a bit rushed and foreshadows events of the second book in the series. The romance is very subtle. There's a grand sweeping passion as well as a marriage of true minds but it doesn't come out much in the novel. I got the impression that Brisbane was annoyed and amused by Julia at first and then grew to care about her. She's attracted to him but unsure of her feelings as yet. She's experiencing a sexual awakening of sorts which is quietly explored in her mind only. There is no real graphic romantic content but there is a lot about the sexual activities of a certain character and some characters are prostitutes. The language is somewhat modern, especially the use of a certain word of an item in the last third of the novel but the rest of the book doesn't sound too modern. I would definitely recommend this to those who love Jane Eyre, Wuthering Heights, Jo Beverley and other novels written in or set in the 19th century. I'm unsure whether I will continue the series at this time though. 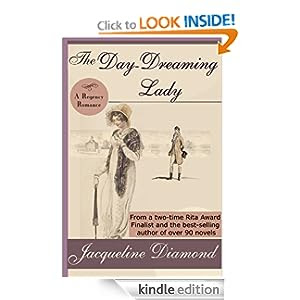 The Day Dreaming Lady by Jacqueline Diamond -- Regency Romance
Lady Sara Rowdon always has her head in the clouds. She loves to daydream stories out of lurid novels in which she stars as the heroine instead of the meek, quiet young lady she is in real life. No one was more surprised than Lady Sara when the dashing young Captain Kenneth Link offered for her hand four years ago. Lady Sara's parents refused to allow her to marry a penniless nobody. Lady Sara's heart was broken and she knows she'll never love another. However, Lady Sara's parents are pushing her to marry Sir Lindsay Manx who will rescue the family from financial ruin and Lady Sara is a dutiful daughter. Now Kenneth has returned to London and he's inherited both title and wealth. As the Marquess of Broadmoor, Kenneth is the object of ever matchmaking Mama in London. He's certain he doesn't want to marry any of the simpering, silly young misses who have set their cap at him. His tastes run more towards the lovely widow Lady Mansfield who is also after the Marquess for his title.  Lord Broadmoor has one main goal for the Season though - to find the young lady who broke his heart and enact revenge by breaking hers in return. If only he could keep from becoming entranced by a certain pair of dreamy eyes. Lady Sara's mother urges her to keep Sir Lindsay in reserve in case Lord Broadmoor doesn't come up to scratch but Sir Lindsay doesn't seem in any hurry and Lady Sara fears she may lose both her suitors. She finally makes some friends and learns a lot about real life as gossip and secrets spread through the ton like wildfire and just maybe she'll become the heroine of her own story after all. Lady Sara is a unique heroine in the Regency genre. I can totally relate to her daydreaming and I can see myself in her and some of the situations she finds herself in are things I would probably do. I think she deserves much better than the hero who is petty and childish. The secondary characters are stereotypical but provide a lot of drama and some comic relief. There isn't much depth to the story. The romance is mostly told rather than developed through the plot. This book is light and fluffy, just what I needed after reading the above mystery. The story may not appeal to everyone though and there are a few typos and errors in the way peers should be addressed.
Posted by QNPoohBear at 10:20 PM