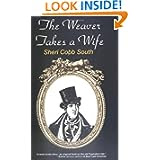 The Weaver Takes a Wife by Sheri Cobb South -- Regency Romance
Ethan Brundy is a baseborn man from the workhouse who has risen to become a prosperous textile mill owner. While in London, he spies the beautiful Lady Helen Radney and declares he will marry her. Lady Helen is known for her hard hard and sharp tongue. Everyone in the ton knows she'd never marry a frumpy nobody like Mr. Brundy. However, what the ton doesn't know is that Lady Helen's father is deep in debt and only an advantageous marriage can save him. Helen loathes to marry Mr. Brundy but it's preferable to becoming a governess - if only slightly. Once married, Mr. Brundy proves to be kind and considerate and perhaps Helen misjudged him, but there's someone else who desires Helen as much as Mr. Brundy and he'll stop at nothing until he has her. This is Regency in the tradition of Georgette Heyer. It borrows heavily from April Lady and also from Pygmalion. (There's even a Col. Pickering!) Mr. Brundy isn't a dashing hero but he's a nice man and likable in his own way. Helen is spoiled and not very likable in the beginning but her character has depth and as the story goes on she grows and matures. There's a slight element of danger to make things more interesting but mostly this is a quiet book about life as a married couple. For me, this story was only average. I'm not crazy about misunderstanding plot and arranged marriage plots. I think fans of Georgette Heyer's more quiet, mature stories will enjoy this one though. 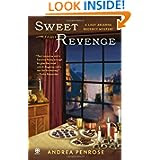 Sweet Revenge: A Lady Ariana Hadley Mystery by Andrea Penrose -- Regency Mystery/Romance
Lady Ariana Hadley grew up in the slums of Jamaica with her English outcast father. She adored her father and when he was killed, she was left on her own. Now back in London, she has vowed to take revenge on his killer. Her desire for revenge causes her to disguise herself as a male French chef working in the home of the notorious Lady Spencer, who has an appetite for chocolate and for rich men. When Ariana serves the Prince Regent edible chocolate (chocolate had only been available as a drink) and he falls over poisoned, Ariana as the chef becomes the chief suspect. The government, wanting to know whether some property in the chocolate could have been poisonous, calls in the Alessandro De Quincy, the Earl of Saybrook, a member of Wellington's staff and chocolate expert. Saybrook agrees to get involved in the investigation and quickly interrogates Ariana. His expert eye sees through her disguise but his wits are dulled by opium taken for a war wound and his life is nearly cut off by a wicked villain. Ariana saves his life and in thanks he brings her reluctantly into his investigation. Ariana hasn't forgotten her vow though and her new disguise as a fashionable widow gains her the confidences of Lady Spencer and entry into a secret society that may hold clues to her father's death as well as the poisoning of the Prince Regent. Ariana thinks she'll never get anywhere if Saybrook doesn't stop taking opium. Cooking up a chocolate concoction, she orders him to drink it to sharpen his senses and heal his wounded body so Lord S can get down to business. Ariana has the ability to change like a chameleon and plays her new role very well - maybe too well for Saybrook. She isn't used to trusting people or having anyone care for him but she must learn if she wants to stay alive. This is a gritty mystery. Unlike most Regency set mysteries, it's a true crime mystery. The crime is of monumental proportions that could have worldwide consequences if allowed to continue. Ariana is not a sheltered young lady. She's had a tough life and she knows lots of dirty tricks, dirty words and isn't afraid to trade sexual favors with gentlemen if necessary. Though I like smart, strong heroines, Ariana is too tough for my tastes. She's very single-minded in her purpose and very bloodthirsty. She goes beyond the limits of what's considered proper behavior and gets involved in something very scary and nasty.  At first I did not think Saybrook would be an appealing hero being drug addicted but he grew on me. Sandro is darkly mysterious and has a bad boy appeal. He's smart, dashing, reckless and caring all at the same time and who can't love a man who loves chocolate? The author's research is excellent and really shines through in the novel. The setting is well done and the mystery is specific to this period. Each chapter begins with trivia and a (modern) recipe for chocolate desserts which I really liked. I would have preferred period recipes in the text and modern ones at the end though. The author is certainly very knowledgeable about chocolate. The author doesn't write in a period voice and there are far too many slang words for male body parts on nearly every page. In spite of that, there are no love scenes or even any kisses. Though I enjoyed the chocolate trivia and couldn't put the book down until the mystery was solved, I really didn't like this book. I didn't like the grittiness of the story. I think I'll stick to drawing room comedies and genteel mysteries. 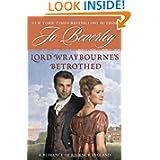 Lord Wraybourne's Betrothed by Jo Beverley -- Regency Romance
Jane Sandiford is a gently reared young lady of strict parents who prefer life in the country to the excesses of London. Jane's parents have selected David Kyle, Lord Wraybourne to marry their daughter. Jane, being a dutiful daughter, trusts her parents to have her best interests at heart. She only hopes her husband is kind and not too old. When she meets Lord Wraybourne he is much more than she ever expected and the handsome youngish man makes her feel nervous and tongue tied. David finds Jane charming and thinks she will make the perfect Countess. Jane isn't so sure. She's nervous about fitting in with Lord Wraybourne's sophisticated friends and family. Jane's governess suggests a Season in London to provide Jane with a little sophistication before her marriage. Under the auspices of Lord Wraybourne's cousin Lady Harroving Jane's dream of adventure is fulfilled. As she spends time with Lord Wraybourne's family, first in the country at The Middlehouse and then in London, she begins to become less shy. She is befriended by Lord Wraybourne's impetuous sister Sophie and Lord Randal Ashby, the biggest rake in London. Jane is confused and conflicted in her feelings towards her betrothed. She's sure he only wants her for her money and her breeding, but why then does he act like a flirt? And why does his flirting make her feel so strange whenever they're together? Unfortunately they are not able to spend much time together because Lord Wraybourne is continually leaving town. The gossips would claim that he has a mistress (or several) that he's visiting but in actuality he is helping his uncle investigate a series of brutal crimes against women on orders from the Prince Regent. Jane must choose whether to believe the rumors or ignore them and follow her heart. She also has to deal with the shocking knowledge that her friend Sophie is suffering from unrequited love for Lord Randal. As Lord Wraybourne comes closer to catching the villain, he discovers that the villain may be too close to his loved ones for comfort. This was Jo Beverley's first novel and is a decent start. The mystery plot would have been more interesting if I hadn't read some of the follow-up novels and already knew who the villain was. The denouement was really quick and should have been drawn out more. The romance plot was a bit boring. Jane's constant insecurity wears thin after awhile. Her fears make sense given her upbringing but are tedious to read. I liked her a lot though, despite her insecurities. I liked seeing her blossom and learn to think and act on her own without direction from her mother. The romance develops nicely and is very sweet and quiet though both the heroine and hero are strongly attracted to one another. I had hoped to like Sophie and Randal after reading about them in other books but I found Sophie to be too young and silly for me to really like. Her hey-go-mad schemes are really outlandish at times and her sauciness is rather rude. The introduction of Randal and his adventures is quite shocking. I was disappointed to learn that his reputation was well-earned and everyone's fears regarding Sophie's feelings towards him are justified. He improves a lot in the final scene in which he appears. That happens to be my favorite scene in the novel. If you're looking for something a little different and more than the chaste kisses only sort of traditional Regency, I would recommend this one. I would not recommend following up with The Stolen Bride. It's not necessary.
Posted by QNPoohBear at 5:40 PM