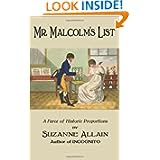 The Honorable Mr. Jeremy Malcolm, the biggest catch of the Season (1818) has a reputation for being a Trifler, a Breaker of Hearts, a Destroyer of Young Women's Dreams. His latest victim is his friend Lord Cassidy's cousin Julia. Julia, a headstrong beauty feels rejected that Malcolm didn't fall at her feet and propose after one outing. Mr. Malcolm tells Cassie that he found Julia boring. Julia, like all other women of his acquaintance, does not meet all of the qualifications he requires in his bride. When Cassie tells Julia about Mr. Malcolm's list she is furious and feels humiliated. She decides the best course of action is revenge. Julia invites her old school friend Selina Dalton to come to London to enact the plan for revenge. Selina, a country clergyman's daughter, had been working as a companion to an elderly lady who became a close friend and confidant. Selina's employer has recently died, leaving Selina with a comfortable independence but not enough to live in London. Selina jumps at the chance for an adventure in the metropolis but when she learns of Julia's plan for revenge, she isn't so sure she wants to do it. Julia plans to present Selina as the perfect bride for Mr. Malcolm but then when he proposes, Selina will announce he does not meet all the qualifications on her own list. When Selina meets Malcolm incognito, she's immediately attracted to the handsome, witty man and when she learns he is the one who spurned Julia, her reservations about then plan increase. She believes that she will never meet all the qualifications on Mr. Malcolm's list so she need not worry about Julia's plan for revenge, but as he gets to know Selina better, he seems more and more intent on getting serious. When her former employer's nephew Henry Ossoroy arrives in town, Selina also finds him a genial companion though Julia is determined to keep Selina and Henry apart. Selina worries she's beginning to lose her heart and what to do if Malcolm proposes? This light romantic comedy is filled with the usual cliched characters and plot devices. I didn't like the relationship between Malcolm and Selina. I felt it could have been better developed aside from mere physical attraction. They are both intelligent and witty but most of their interactions are sparse on dialogue. Malcolm mostly comes across as a snob who doesn't really know what he wants. Selina is a bit too nice at first but she improves as her temper is tried. Another character experiences a change of heart which seems too abrupt. The dialogue is stilted and unrealistic and there's lots of telling as opposed to showing. The list plot has been done much better elsewhere. If you enjoy the light, fluffy books of Clare Darcy and other Georgette Heyer copycats you'll like this one. If you can get a copy for free or download the inexpensive e-book version, then this book is worth the money. It was not well-written enough for me to feel the paperback was worth the price. 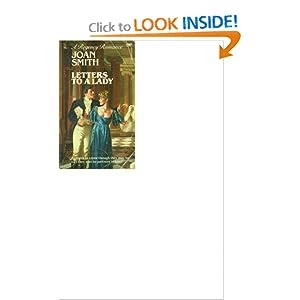 Letters to a Lady by Joan Smith -- Regency Romance

When Diana Beechum's neighbor, Lord Harrup, sends a letter from London asking their old nurse to send a foodman to pick up a packet of important documents from a Mrs. Whitby, Diana decides to do it herself. Diana and her chaperon/former nurse Miss Peabody, will be heading to London to help her brother Ronald get settled into his new apartment. Diana is shocked to discover Mrs. Whitby is a member of the muslin company and the important "documents" are actually love letters written from Lord Harrup to his former mistress. On the road to London, the letters are stolen by someone who knew to look for them. Upon arrival in London, Diana installs herself and Peabody in Lord Harrup's house despite the high in the instep reputation of her neighbor. She vows to get the letters back and hopes that Harrup will reward Ronald with a secretarial position. Lord Harrup is perfectly happy to pay any blood money to thwart the publication of the letters which would hinder both his political career and his engagement to the very young and proper Lady Selena. Diana is not afraid to speak her mind to Lord Harrup and tell him exactly what she thinks of his consorting with lightskirts, willingness to comply with blackmail and her thoughts on "old" men of 35 marrying innocent young teenage girls. Diana never dreamed that her search for Lord Harrup's documents would send her on an unexpected journey fraught with danger both to her person and to her heart. The plot drags on too long though the book is short but the search for the letters serves as a backdrop to bring the characters together. I liked Diana a lot and admired her willingness to speak her mind. However, I felt Diana was a bit too naive at times and some of her exploits would have resulted in hanging! Lord Harrup is not a very well-rounded character. He's a semi-Mr. Darcy copy with more of a temper. His interactions with Diana are very real though and I liked their relationship. I think more of the story needs to be from his point of view so the reader can tell what he is feeling and how he evolves. I especially loved Ronald, who, like me, is bookish and absent minded. He is a nice character and the jacket description of "bumbling" does not apply to him. He is a good foil for Diana. This is a nice, light predictable romance. It has charming moments that don't quite reach screwball comedy status but are funny just the same. I really enjoyed this book and recommend it to those who like light, fun romantic comedies.
Posted by QNPoohBear at 5:01 PM