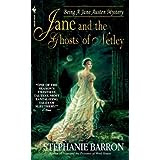 Jane and the Ghosts of Netley
This 7th installment finds Jane still living in Southhampton living with her mother, sister and friend while waiting for Mrs. Austen to decide whether to move to one of Edward's holdings in Kent or Hampshire. Jane's curiosity is awakened by the arrival of someone at Netley Abbey. Rumor has it that the Abbey is haunted by ghosts of the monks who used to live there. Jane doesn't quite believe it but it's fun to imagine just the same. She is surprised by a visit from The Gentleman Rogue himself. Lord Harold wants Jane to spy on the beautiful but dangerous widow Sophia Challoner who resides at the Abbey. Lord Harold believes that Mrs. Challoner, whom he had known intimately in Portugal, is a French spy. An unlucky accident brings Jane right into Mrs. Challoner's home and her confidence. The widow has nothing good to say about Lord Harold and Jane begins to question whose opinion is correct. The arrival of a stranger from Baltimore arouses Jane's suspicion but she becomes confused again when Maria Fitzherbert, a cast off royal mistress, joins the house party. While Jane socializes with Mrs. Challoner and friends, she dreams of living the life of a tonnish lady by Lord Harold's side. Another mysterious stranger arrives at the Abbey and Mrs. Challoner's maid accuses her employer of witchcraft. With the help of His Lordship's valet, Jane attempts a more in-depth investigation involving hysterical maids, secret tunnels and a stranger called Mon Singeur. Just as Jane thinks she has it all worked out, something goes horribly wrong and one dear to her becomes the victim. This is not the best mystery of the series. It's not too difficult to figure out who Mon Singeur is and what the connection between Mrs. Challoner's houseguests is. I also suspected the villain and I think that Lord Harold was stupid and should have figured it out. This story is darker and more sad than some of the others. Jane spends almost the whole book mooning over Lord Harold and I find it quite out of character for her. 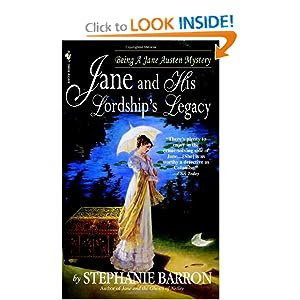 Jane and His Lordship's Legacy
Do not read this review unless you have read Jane and the Ghosts of Netley.
Jane and her family have finally removed to a cottage in Hampshire on the Knight estate owned by her brother Edward. Jane feels she should be rejoicing in the move back to the country but her heart is heavy. She mourns the loss of Lord Harold and wonders what he really thought of her. Upon arrival, a London solicitor shows up at Chawton Cottage for Jane. He brings with him a bequest from Lord Harold. Lord Harold has left Jane a Bengal chest full of his personal papers for her to use in writing a memoir of him. Half of London would give anything for that chest of papers and the other half is busy gossiping about Jane's relationship to Lord Harold, much to the dismay of Jane's Mama. It also seems that the locals are unhappy with the Austens arrival in the country. They feel that one of their own, a Mr. John-Knight Hinton is the true heir. While the locals gossip about the too high in the instep ladies arriving at Chawton Cottage and despair over the removal of the bailiff's widow who previously inhabited the cottage, Jane is busy trying to hide the chest of papers. While moving the chest to the cellar with help from a neighbor, Jane discovers a man's body. Calm and collected, Jane knows just what to do and she isn't about to miss the inquest and her chance to give testimony. The her beloved Lord Harold's papers are stolen and Jane wonders if the two events are connected. It seems the locals may have an interest in Lord Harold's papers as well for a young Mr. Thrace has come to Hampshire. The London gossips say the young man is an illegitimate son of a peer and about to be made the heir. There are two possible gentlemen who could be the Mr. Thrace's father and both were connected to Lord Harold. The daughter of Lord Harold's old friend the Earl of Holbrook has also come to Hampshire to contest Mr. Thrace's possible right to inherit her family home. Rounding out the cast of characters are Major Spence who is the Steward of the Holbrook estate, two young ladies and a bunch of villagers and workers in Chawton. Jane must use her wits to discover who stole Lord Harold's chest and also see that the murderer is found and brought to justice. Part of this mystery should have been fairly easy for Jane to figure out. Once the clues were laid out and the red herrings cleared away, I figured out the mystery of the heir. Then I figured out the WHO and some of the why. It took Jane much longer and I would think that someone as intelligent as she could have used the information she was given to put the clues together and solve the mystery. I did not like the author playing fast and loose with real historical events and people. She explains why she did it in the Afterward but I don't like it when she does that. I do like that Jane went around accompanied by her brothers, though she makes a stupid mistake at the end. I also don't like that she had lost her heart to Lord Harold. I think the author is taking too many liberties with Jane Austen's life. I shall have to see how the next book is before I decide if I am going to continue reading the series. 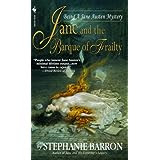 Jane and the Barque of Frailty
Jane is staying in London with Henry and Eliza to oversee the publication of her first novel. Jane has a chance to experience life among the Great including the scandals and gossip that the ton feed on. The latest scandal involves a Russian princess and some love letters published in the newspaper assumed to be written to Lord Castlereagh, a prominent Tory MP. When Princess Tscholikova is found dead on Lord C's doorstep, it fuels the rumors of an intimate affair. Lord C swears he never knew the princess and was innocent of any wrongdoing. The coroner rules self-murder and the case is closed. However, Jane can not let the matter rest, for she and Eliza have been accused of murdering the princess, all thanks to a favor for one of Eliza's fellow French emigrees. Jane is determined to put her sleuthing skills to work to solve the murder. She sorely misses Lord Harold but his personal papers suggest that the late princess may have been a political pawn in a larger game between Lord C and his political opponents. Jane also wonders what role the beautiful high flyer Julia Radcliffe has to play, if any. There's no denying that all the men of London are at her feet. Could she be a French spy? There are plenty of twists and turns in this story to keep Jane and her readers guessing. Some mysteries remain unsolved even at the end. The mystery is quite intriguing though I found the political situation confusing. As for a story featuring Jane Austen, spinster, as a character, this one completely fails. It starts off well enough but heads into fantasy land and ending with something that no well-born lady, let alone Jane Austen would do, even to solve the mystery. Once again the author incorporates real life people and situations into her story which I dislike. This time she goes farther taking Jane into the glittering world of the ton and visiting with high flyers. The books always seem well-researched so it came as a surprise that the author would even consider having her Jane do something so improper. This is not the best book of the series but if you want to read it as a Regency-set mystery and ignore the fact that the sleuth is the REAL Jane Austen, it's quite a good book. It would be a better book with a made up heroine.
Posted by QNPoohBear at 5:07 PM