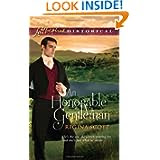 Regina Scott's newest book features Sir Trevor Fitzwilliam, the mysterious best friend of Chase Dearborn in The Irresistible Earl. Sir Trevor has recently been made a Baronet and is heading to the estate purchased for him by his benefactor. Sir Trevor hopes that the estate will provide enough income for him to live as an honorable gentleman should instead of scraping by solving puzzles of embezzlement, theft and adultery for the ton. Sir Trevor longs to be a part of that glittering world that he's only ever been on the margins of since his illegitimate birth makes him ineligible to properly take his place in society. Sir Trevor's hopes are quickly dashed as the manor house is crumbling and the land is not fit for crops or animals. A mysterious nighttime intruder only adds to Sir Trevor's problems. Gwen Allbridge has been helping her father oversee Blackcliff Hall almost all her life and in the last year, since her mother's death, she has been doing so almost entirely alone as her father drowns his sorrows in gin. Gwen and her faith Mastiff Dolly are checking on things one night when a mysterious intruder awakens Sir Trevor and he literally crashes into Gwen. Gwen is thrilled a master has come to Blackcliff Hall at last. She believes he is the one who can rescue the dying village and bring back happier times. Sir Trevor is skeptical but Gwen is determined to show him the beauty of Blackcliff and make him see that he has to stay. Sir Trevor finds Gwen's faith in him irresistible but yet how can he live up to her expectations with his background and lack of funds working against him? When the mysterious intruder returns, Sir Trevor may just find his path to happiness after all. I liked this book much more than the Irresistible Earl. It contains a mystery, that though I figured out really quickly, had me interested to see how the characters would figure it out. The characters are more appealing than Chase and Mercedee too. Sir Trevor has a slightly roguish air about him that I find attractive. He's not overbearing like his friend though he is rather cynical at first. Gwen is an appealing heroine because she's strong and intelligent. She's also very very good and incredibly naive, traits which I found irritating at times. This novel contains a bit more inspirational content than the first. There are brief pleas to the Lord, some Bible reading and more in-depth prayers. Most of all is Gwen's firm belief that the Lord will provide and He has provided Sir Trevor. Sir Trevor must learn to have Faith as well. I didn't find the Inspirational content too obtrusive. I was able to gloss over some of it. I would recommend this book to readers of Regina Scott's earlier Regencies and to those who don't mind Inspirational fiction. 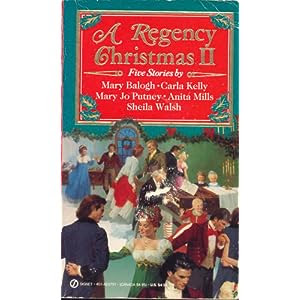 In Sunshine for Christmas by Mary Jo Putney, a lonely gentleman heads to Naples for the holidays hoping to find some sunshine. Instead he finds an English governess who shows him the the sites and finally the path to happiness. This is the best of the stories in this anthology. It's well-written though I think the relationship between the characters is a little too informal for that era. The descriptions of Naples are incredible and now I rather feel like joining my parents on their holiday there next year. The romance is very sweet and believable.

The Last Wish by Anita Mills has three young gentlemen coming to attend their uncle's deathbed. Two of the three are deeply in debt and hope to inherit their uncle's fortune. Then a young woman and a small girl show up claiming that the girl is the daughter of Sir John's estranged younger son. Sir John is very ill and wants to make peace with his son but it's too late. Now there's a granddaughter and her aunt to care for but what to do? Sir John decides on a solution but it's one that can not be agreeable to little Rebecca's Aunt Maria. She would rather starve than accept charity. It will take a Christmas miracle to save Maria and Rebecca from the poorhouse. This story is somewhat of an imitation of Georgette Heyer's style but doesn't match her wit or unique characterization. It's a standard story with a predictable ending.

In Playing House by Mary Balough, Lilias,  an impoverished young woman, swallows her pride and calls in a debt to the Marquess of Bedford to make Christmas for her younger siblings. This will be the last Christmas they have together before Lilias is forced into service and her siblings sent to relatives. The Marquess was once Lilias's childhood friend. He and his older brother used to make merry with Lilias and her younger brother. Now both brothers are dead and the Marquess has grown older and cynical. He learned at an early age that everyone wants something from him and he fears Lilias is hoping to trap him into marriage. He promises himself he'll be courteous and give her the gifts for her siblings but he will not be trapped into another loveless marriage. He's been there done that and the only good to come out of it is is four-year-old daughter. On a standard Christmas visit to the villagers, little Dora becomes fast friends with Lilias's sister and brother. The three children have such fun together that the Marquess can hardly deny his little girl the pleasure of their company. Of course that means being thrown together with Lilias again and being reminded of the love they used to share. Lilias knows that her beloved Stephen would never be so cold as the Marquess but she occasionally gets a glimpse of the boy he used to be and that makes leaving him that much harder. This story is a tried-and-true formula. The relationship develops nicely and is believable based on the characters' past history. The ending is a bit rushed and fairy-tale like.

In The Three Kings by Carla Kelly, Lady Sarah's brother James has just been killed and she taken prisoner of the French. She doesn't understand why she has been placed in such a situation for she and her brother were engaged in scholarly research in a library in Salamanca. With the French hard on the heels of the retreating British army, Sarah must find protection with the Spanish and British troops to find her way home. She's entrusted to the care of a Colonel Sotomayer. He is anxious to get home to his two young daughters for the feast of the Three Kings on January 6th, but the French are after Sarah and he swore he'd see her to safety. This story has a much darker tone than the others. It's full of loss and sadness and finally, love. Of course the ending is predictable but I liked it. Because of the circumstances the characters were in, the romance was fully understandable and very welcome.

The final story, The Christmas Star by Sheila Walsh is a Cinderella story wherein almost-18-year-old Louise has come to spend Christmas with her wealthy Godmother, a Duchess, and her family. Louise has spent the last several Christmases with the Duke and Duchess but this year she will be staying on as a companion for the Duchess. Lou is unsure of her place: not quite a servant and not quite a family member. When a dashing Russian prince needs her help, she is quick to offer assistance without knowing the plot. She discovers a tale of young lovers separated and a young lady in need of rescuing. Though Louise may wind up with a broken heart, her generous nature will not allow her to leave a young woman abandoned to a merciless fate. This is a true fairy tale. The plot is unique but the romance is entirely predictable. This story is too light and fluffy for my tastes.
Posted by QNPoohBear at 3:58 PM