A Tour of Bath


Monday September 16 turned out to be a bright and sunny day in Bath. I grabbed my beautiful copy of Jane Austen in Bath: Walking Tours of the Writer's City by Katharine Reeve and went out to walk as many of the walks as possible. 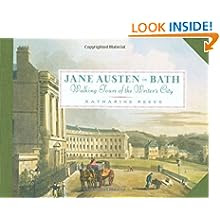 First stop up the hill: The Circus- a circle of Georgian terraced houses. The Circus designed by the famous Georgian architect John Wood and built by his son, John Wood, the Younger.  Jane Austen visited friends at No. 11.

The slope had to be leveled in order for it to be built. There are 33 houses in three terraces. The diameter of 318 feet matches Stonehenge. It is likened to the Colosseum turned inside out. The center of the plaza was intended to be paved but by 1801, the pavement was replaced by a reservoir of water for household use surrounded by shrubbery. By 1829, trees were planted over the reservoir. The trees stopped a bomb from burning the Circus during WWII.

The top of the circle features a carved frieze of 500 images from the arts and sciences, sea and agriculture. The traditional symbol of the acorn is represented by giant carved finials.

I headed down Gay Street to see where the Austens once lived. Then I went down to the unfashionable end of town where the Austens were forced to live after Rev. Austen died. I continued along to Westgate buildings where Anne Elliot’s impoverished, widowed friend lives.  I looped back to the center of town cutting through the little square where the Cross Bath is. The Cross Bath goes back to Georgian times and was a fashionable spa. I stopped for a picture of the entrance to the King and Queen’s Baths so popular in Jane Austen’s time.

Posted by QNPoohBear at 3:11 PM